Clear again with a brisk NNE wind, three and a half hours vis.mig. produced totals of 1,045 Chaffinches, 566 Woodpigeons, 94 Linnets, 26 Crossbills, 17 Goldfinches, 4 Siskins, a Great Spotted Woodpecker and a Sparrowhawk, all flying upchannel into the wind.

Sadly, but understandably, it has become clear that driving from home to take exercise is not acceptable under the restrictions to prevent the spread of the Covid-19 virus, so coverage will be suspended until further notice. On the positive side, the birds, butterflies and moths will still be there when things improve and, after all, when the cat’s away ………..

With the wind in the east and a clear blue sky excitements were at a premium. However, a Sparrowhawk flew high out to sea at 0625, 12 Redwings, 4 Siskins, a Great Spotted Woodpecker and 68 Chaffinches flew SW and the Linnet flock on the fields increased slightly to 60.

Cloudless again with a brisk but slackening SE breeze movement included 7 Siskins, a Reed Bunting, 2 Bramblings and, at 0805, 3 Red Kites that flew NE together along Reach Road, followed soon after by 2 Sparrowhawks. 3 Blackcaps and 2 Chiffchaffs were vocal at the top of the valley, but in the light of current restrictions I ventured no further.

The thermometer may have read 8 degrees, but a ripping NE wind made it feel anything but. To make matters worse, absolutely nothing was moving along the cliff, but by way of compensation at least 4 Harbour Porpoises were visible offshore and a Weasel poked its head above the grass at Fan Bay, possibly looking for some tuppenny rice.

With the wind in the NE what should have been a really good morning was obliterated by dense fog that lasted into early afternoon. Some Meadow Pipits were picked up arriving from out of the murk, with 63 along the cliff and farm, 6 Chiffchaffs were calling in the gloom and 60 Redwings materialised suddenly over the farmyard. Just to cheer things up a bit, here’s one of the Wheatears from Monday, courtesy of Kevin Johnson:

An almost identical morning to yesterday, with Black Redstart and Firecrest at Langdon Hole and Firecrest and Coal Tit along Lighthouse Down more or less the only highlights.

Bright with a frisky SW breeze it was nowhere near as good as yesterday, with SW movement limited to 16 Blue Tits, 82 Woodpigeons and 89 Chaffinches. 2 Chiffchaffs were singing in the valley and a Common Buzzard flew out to sea then thought better of it and headed N.

At last, a morning that really felt like spring! A mostly overcast and cold start produced some movement that included 405 Chaffinches and 187 Woodpigeons NE and 2 Siskins, 32 Great Tits and 17 Fieldfares SW, while 36 Meadow Pipits and an alba wagtail flew in off the sea. 5 Chiffchaffs were scattered about, a Black Redstart was at the lighthouse and 4 Wheatears appeared once the sun began to warm things up, an improvement not lost on 9 Common Buzzards that were soaring about. A Firecrest in the Top Wood, a singing Blackcap and both Brimstone and Peacock butterflies polished off a really nice morning. 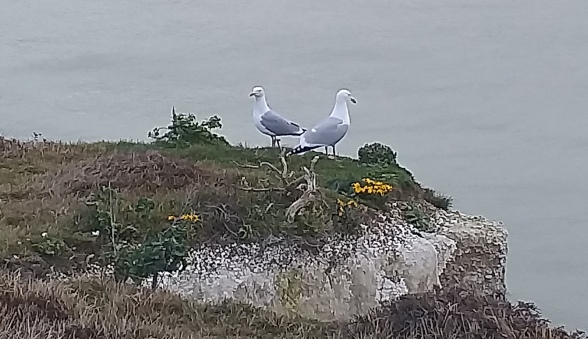 White horses in the bay betrayed the strength of the S wind, which was a good deal friskier than forecast. In the event, only 90 minutes was possible before rain set in, during which 89 Redwings and 29 Chaffinches flew up the valley and 5 Ravens were interacting with a Peregrine over the lighthouse.

Bright with a light-ish WSW breeze the first 45 minutes or so at the top of the valley brought further signs of spring, with 31 Great Tits, 4 Blue Tits and 5 Siskins over the Top Wood and 2 Crossbills off the sea. 2 Redwings put in an appearance, a Chiffchaff was calling on the farm, a Blackcap was singing from the windmill garden and, with all of the locals already in pairs, 7 Long-tailed Tits that flew along Reach Road may also have been migrants.

Confined to barracks by an impending boiler service it was left to Mark Kennett to provide coverage this morning and despite some drizzle it proved worthwhile. 400 Redwings and 41 Fieldfares were at Fox Hill Down and the WW1 airfield, a Blackcap was singing in the bushes, 2 Woodcock were probably typical March migrants and a Chiffchaff was singing in Fan Bay, with a Reed Bunting nearby.

Back from an enjoyable week in Yorkshire to a grey morning with poor visibility. An hour and a half staring at the sea brought little of note, though 3 Little Egrets were clambering around on the rocks, 22 Great Crested Grebes were on the sea and 4 Curlews flew  across the bay. I think I preferred a sunny, wind-free morning on the moors with Red Grouse and Wensleydale sheep.

A sunny morning with a gentle breeze brought continuing signs of spring, with 16 Chaffinches and 5 Linnets flying along the cliffs and 5 migrant Song Thrushes that exited cover and headed skywards. 10 Yellowhammers was the most so far this year and an alba wagtail flew SW along Lighthouse Down, but there was no repeat of yesterday’s grebefest.

Despite early rain and brief watery sun it was calm and a welcome relief from the excesses of February. A 45-minute seawatch wasn’t the most exciting, with little more than 64 Gannets, but a Black Redstart was hopping about in the bay and on arrival at the clifftop a Chiffchaff was calling from scrub below the lighthouse. A Lapwing flew off from fields at Fan Bay, 5 Curlews flew NE and three rafts totalling a record 162 Great Crested Grebes were floating on the sea, mainly beneath Lighthouse Down, to cap a really nice early spring morning.

Published by Letters from Coryates

View all posts by Letters from Coryates